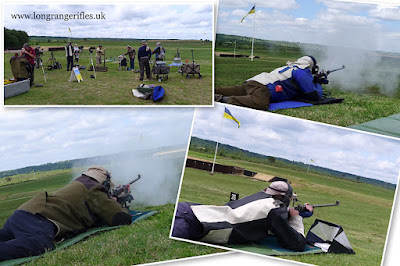 The Branch shooting programme earlier in the year had been cancelled, so as Bisley range access restrictions eased opportunity was taken to arrange for 5 days of shooting in June. Recognising that some members had little or no shooting opportunity in 2020, Wednesday 9 June and Thursday 10 June were booked as practice days

The shooting conditions were characterised by dry weather, increasing temperatures and changeable winds.  David Minshall took advantage of the more stable conditions on Friday to win the 900 yard Championship. John Whittaker showed his mastery of difficult wind conditions on Saturday to win the 1000 yard Championship. Alan Beck and Paul Wolpe shot consistently well to finish second and third respectively on both days.

Entries for this first event of the year were understandably lower then normal, but it was good to see some semblance of  normality returning and members able to make use of Bisley Camp accommodation and Club House hospitality. Given the prevailing travel limitations our members from France and Holland were unable to attend, and their presence was missed.

The weekend's shooting was concluded with the MLAGB National 600 yard Rifle Championship on Sunday 13 June.